One sunny Friday morning this summer, Ali and I took a 70 mile drive up the M1 to Northamptonshire to do an experience we had both always been curious to try – llama trekking. It turned out to be love at first sight and we are already planning to go back!

Ali “Announcing on Facebook that I was off to walk with a llama, a witty friend wondered aloud if it was the Dalai Lama, as my quest for zen experiences is well-known. Not quite, but my lama experience turned out to be more holistic than I could have imagined.

A farmer’s daughter, I can deal happily with cows (agreeable), sheep (well meaning but dim) and horses (who believe their own hype), so I faced the thought of a llama encounter with curiosity but no over-arching excitement. On meeting my llama, I had the feeling he viewed me much the same way”.

Issy “Sarah our guide welcomed us at the visitor centre barn, a bright, new and spacious area filled with information, a working loom, hand spun llama wool goods and trinkets. This is where we had our initial introduction and learned some history about South American llamas and alpacas, their habits and likes. Sarah’s knowledge and enthusiasm was second to none. After the introductions we trooped out to meet our companions.

Ross and Kaytie were trekking with us (a gift for Kaytie’s birthday). We were envious that they would also stay in Catangar’s authentic hand crafted gypsy caravan next to the llama field that night”.

Ali “Five llamas were readied for a trek. Indigo was led out first to show us humans how to correctly handle and respect the llamas and get the most from our walk. He was haltered and moved curiously like a bird, arching upwards on two hoof-like toes. Bright-eyed, curly haired and clearly quite cheeky (him, not me), I immediately volunteered to take him as my companion”.

Issy “This definitely didn’t feel like a two hour walk and I found it relaxing and calming, alongside my new friend Mungo (supreme champion at a recent show, easily llama supermodel material).

Sarah confirmed the special connection many people comment on when walking with a llama. Catangar Llamas offers treks to special needs and disabled guests, where these gentle animals with their quiet grace and sense of peace, seem to be able to transmit calmness to any human visitor.

It was harvest time and we strolled through stunning countryside, undulating but mostly flat, across fields newly cut, with hay bales dotted about. Sarah led Mr Kang, a teenager who was being trained to accept a back pack, so he carried complimentary water bottles for each of us and about halfway through, we stopped for a few minutes to drink and take pictures”.

Ali “All too soon we had come through dappled woodland back to base. Each llama had his harness removed and joined all the other males in the field, from the grandee of them all, 20 year old Spinach to Tiny Ted, an alpaca runt half the size of a normal alpaca (what he lacked in height he made up for in personality).

We also visited the girls in their field. Mothers and babies galore had everyone’s hearts melting. There have been five births this year and only very heavily pregnant Jemima remains. Although 14 months in and due anytime, despite all our hopes, Jemima didn’t oblige us on the day (but be sure to check our Facebook, Twitter and Google+ pages for a picture when she does have her baby). 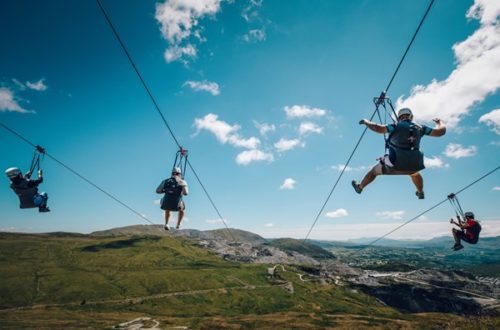 Ready to fly the Phoenix? The ultimate guide to the new Zip World Tower