A now-famous Eventbrite study confirmed something we had long suspected: that millennials (those born between 1980 and 1996) are favouring real life experiences to material consumerism. ‘Well, of course,” we thought “Doing or having, it’s a no-brainer”. Red Letter Days is the original proponent of eschewing ‘stuff’ and embracing the unfettered joy of doing from Adventure Days to Short Breaks. Even so, the study was a real eye-opener.

Experiences versus Consumerism: The Study

The habits of 18 – 34 year olds across the UK were examined in order to ascertain several things, including whether ‘doing’ or ‘having’ made them happier and to what extent ‘fear of missing out’ motivated them. The subjects were recruited via an online panel and broad quota controls were applied to ensure that the population was properly represented in terms of gender, age and region.

A massive two-thirds of respondents said that they got more fulfilment from live experiences than from buying an item of the same value. There was also mention of the dreaded Fear of Missing Out (FOMO), with nearly 3 in 4 respondents agreeing it was a factor in their drive to seek out new activities. Intriguingly, Welsh millennials were most affected by FOMO (90% of those asked) with London and North East joint second (84%).

By doing instead of having, those people situate themselves within a global shared conversation. Millennials are seeking fulfilment elsewhere: from getaways rather than gadgets; track days over trinkets; jet skiing instead of jewellery; distillery visits over decor. In fact, Eventbrite’s study threw up a staggering figure: the age group spends £419,556,233 each month on live events. This makes them the demographic which fuels The Experience Economy above all others.

But what does this tell us about that generation? We can surmise that worrying less about owning ‘stuff’ means being less susceptible to the ‘treadmill of consumption’, that accelerating feeling of always needing more and more which can never be satisfied. It’s also accepted that getting out of the house and having fun is beneficial for mental well-being.

Living a happy, meaningful life is about creating, sharing and capturing memories earned through experiences that span the spectrum of life’s opportunities.
~Eventbrite

In an attempt to add to this data, we turned to the social-mediasphere and asked similar questions of our own. Using Twitter and Instagram polls over just a few days, we collated 267 responses. Here’s what we found.

Our Twitter poll, which ran for several days, asked two multiple-choice questions. When asked ‘To what extent does Fear of Missing Out affect your decisions?’, respondents overwhelmingly replied ‘It doesn’t’. This goes against Eventbrite’s findings, which concluded that almost 75% of millennials fall prey to this very specific type of peer pressure. 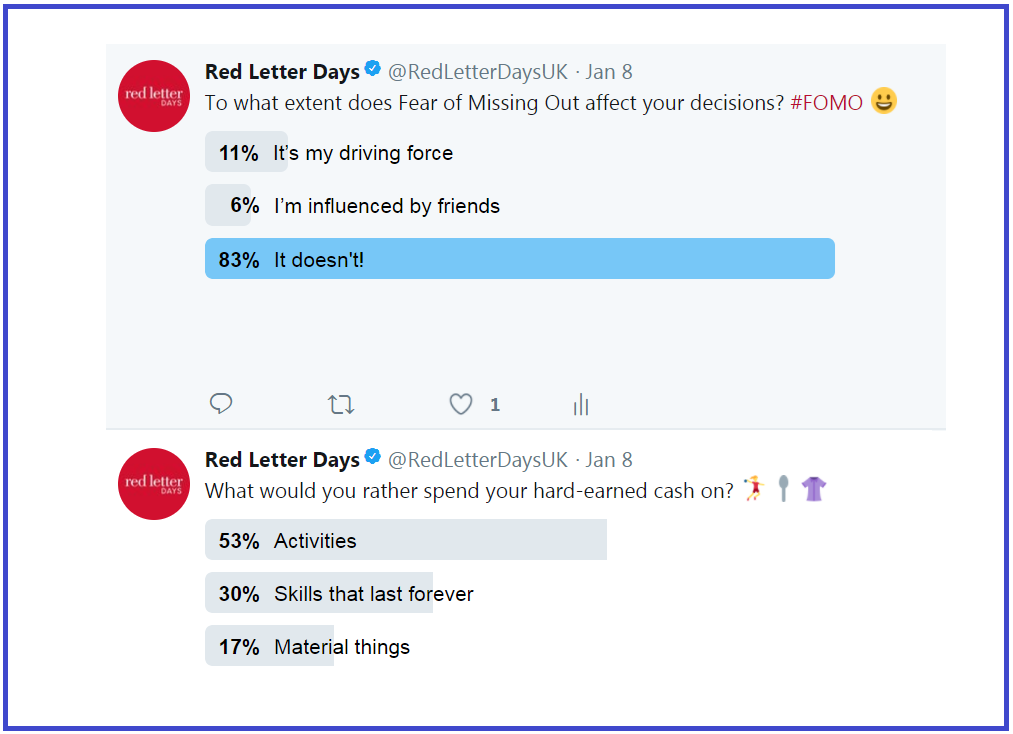 We also asked, ‘What would you rather spend your hard-earned cash on?’ Here, the answers aligned smoothly with the Eventbrite study. The majority (53%) prefer to buy activities, while 30% believe skills are the best investment and a mere 17% opted for material things.

219 people took part in our Instagram poll. We asked a couple of hypothetical questions to go with a choice of photos.

First, ‘You want a new bracelet. Would you rather make it or buy it?’ A staggering 66% said ‘Make it’. Does this mean our respondents are a particularly frugal bunch, an arty crowd, or simply uninspired with what the jewellery market has to offer? We can but speculate…

Next we asked, ‘You’ve got a need for speed. Will you do it or watch it?’ This referred to motor racing. A resounding 77% said, ‘Do it!’ Our respondents are a grab-life-by-the-short-and-curlies kind of cat, clearly.

Our (much smaller scale) survey agreed wholeheartedly with Eventbrite’s picture of a fun-loving, adventurous memory-maker. On the other hand, we were unable to replicate the significance of FOMO, with most of our respondents saying it was not something that affected them.

If you fit into that category of experience hunters, take a look at our Bucket List posts for some inspiration.

Ways to Keep Cool in the Summer Heat

The Magnificent Month of Movember